WHAT ARE PEOPLE FOR? – KUNSTVEREIN GOETTINGEN – JUNE-JULY 2017

What Are People For? at Kunstverein Göttingen is British artist Anna McCarthy's first institutional solo show in Germany. Black humor, intelligence, political resistance and an almost journalistic interest in societal topics characterize McCarthy’s work. At the Kunstverein Göttingen, McCarthy deals with the production and reception of current news. The dispositif term refers to exhibitions that are seen as "arrangements", which constitutively represent a structure for organizing knowledge of a society/culture, and thereby form and question interpretations and laid out constructions. The usual linear narrative, with which present-day and historical occurrences are written, McCarthy counters with a subjective (exploratory) approach. McCarthy's video series "HTSAR TV", which was produced at Lenbachhaus Munich in 2016 and will be shown for the first time in its entirety at Kunstverein Göttingen, describes the world's current political situation as a global "state of emergency": A contemporary vision, in which sense and social responsibility has lost all importance and political populism has taken over knowledge production and the regime. Rooted in real situations and occurrences, the series immediately reacts, as does daily news, for example to the alleged coup d'etat in Turkey last summer. The videos show a kind of real-dystopia, and at the same time our unintentional, as well as intentional inability to counteract the dominant political situation: The "HTSAR TV" journalist resigns on her summer holiday, stating plainly: "I have turned of all news push notifications". Alongside the videos, McCarthy incorporates a series of installations, which deal with topics surrounding humanity, hierarchical power structures and develops on the figure of the scapegoat, which already makes an appearance in the video series. "People-killing Pizza Machine" and "Cucking Stool" are two installations, which McCarthy describes as "Rubbish Torture Instruments" – crudely built and non-functioning torture instruments. The installations are constructed from found objects, which can continually change their position, but through their layering attain structure from chaos.

For the Kunstverein Göttingen McCarthy's artistic research expands to the topic of hunting and scavenger hunts. She approaches this line of thought idiosyncratically and associatively, from laying trails with aniseed to the original ancestress and matriarch of the Jack Russell breed, who goes by the name of "Trump", to falsely laid trails leading over crumbling walls and through mountains of mystery meat.
McCarthy follows an interdisciplinary approach to combine personal fiction with current political, cultural, ecological and social changes to our time and creates almost conspiratorial connections between personal and actual societal change. Her way of working is thereby always based on improvisation and intuition, so that coincidences and mistakes are fundamental elements of her practice. Anna McCarthy's works are impressively manifold and all encompassing: She works in an array of media, including drawing, painting, installation, music, video, performance and artist book. The collages, sculptures and films, often result from found and forgotten objects from her household, as well as from the street. McCarthy uses these different elements and individual parts to construct a world of experience, in which visitors can go on a mental scavenger hunt.
The accompanying artist book "What Are People For" by Anna McCarthy, is an associative, contextual supplement to the works on show at the Kunstverein. Publication available to order here or via Hamman & Von Mier publishing. 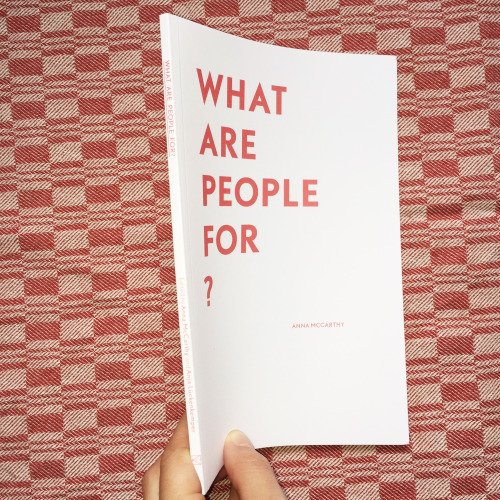 Guarder of the Peace